Anzalone Law Offices fights for victims of sexual abuse and we would like to express our gratitude to the PA House of Representatives for doing the same. Please call your Senator and encourage them to follow the House’s lead and give sexual abuse victims a chance to be heard.

WILKES-BARRE — When the votes were tallied Tuesday and Senate Bill 261 was approved by the Pennsylvania House of Representatives, Rep. Mark Rozzi, sponsor of two amendments to the bill, told his colleagues to “go home and be proud and let people know you stood with victims.” 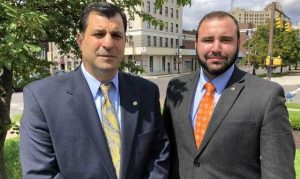 Rozzi, D-Berks County, was 13 when a Catholic priest brutally raped him in the shower more than 30 years ago. Now 47, Rozzi is leading the fight to give all victims of past sexual abuse the right to seek justice.

“All victims ever wanted was an opportunity for justice, to be able to walk into that court of law and expose their perpetrators,” Rozzi said after the vote. “And maybe we can protect future kids from being abused. Go home and be proud and let your people know that you stood with victims. You did not stand with pedophiles or the institutions that will protect those pedophiles.”

The bill must now be approved by the state Senate. The House voted 173-21 to approve the measure that would create a two-year window for litigation.

A state grand jury report issued last month found more than 300 Roman Catholic priests abused children in the state going back to the 1940s, and church officials covered it up.

“I thank all of the members in the bipartisan majority of the House that approved a pathway for justice for these victims in the court system,” Wolf said. “This is a huge step forward for the abused and would reaffirm Pennsylvania’s role as a national leader in standing up for victims. I urge the entire General Assembly to do the right thing and advance these reforms to my desk.”

Rozzi was in Wilkes-Barre on Aug. 22 with Rep. Aaron Kaufer, R-Kingston, who voted in favor of the bill.

“Instances of sexual abuse of children are truly some of the most disgusting and disturbing crimes,” Kaufer said Tuesday. “This bill affords all victims of childhood sexual abuse to finally seek justice on those who commit these heinous crimes. I was proud to stand up for victims when I cast my positive vote for this bill with all victims of sexual abuse in mind. This is, undoubtedly, a step toward justice.”

In August, Rozzi said he decided to go public with his own story, first published in the Reading Eagle newspaper, and that resulted in more than 200 other victims — many he knew — coming forward to support him and his effort.

Rozzi said he and Kaufer can’t understand how any legislator could oppose his amendment.

Rozzi said he knows there are many more victims out there. He wants them to come forward and tell their stories. He said what happens next is up to the state senators.

Pennsylvania law currently allows child victims of sexual crimes to pursue criminal charges against their abusers until age 50, and they can file civil lawsuits until age 30.

Anzalone Law Offices make food donations to first responders, encourages others to do the same
April 3, 2020

More than half of Luzerne County nursing homes rated ‘below’ or ‘much below average’
September 24, 2019