You are here:
newsTruck Accident 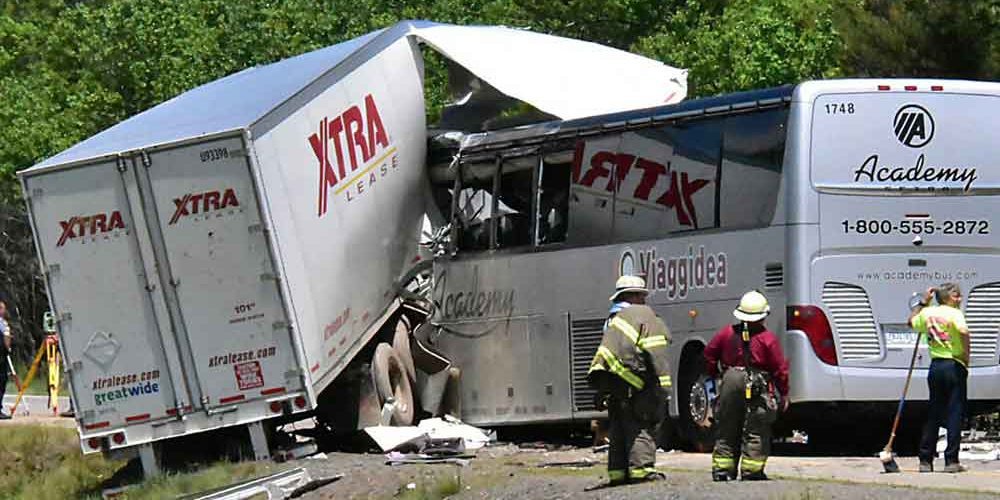 A truck driver who said a medical condition caused him to black out before a crash that killed two Italian tourists and their bus driver in Pennsylvania’s Pocono Mountains has been charged in the deadly crash.

Franklin Wyatt, 57, of Macomb, Oklahoma, was charged with three counts each of vehicular homicide and involuntary manslaughter, along with multiple counts of assault by vehicle and reckless endangerment.

The victims, including an Italian pharmacist killed on his honeymoon, had left New York City for Niagara Falls as they began an eight-day tour of the Eastern U.S. and Canada on June 3, 2015.

Wyatt crossed the grassy median as he drove south on Interstate 380 that morning and struck the back of a northbound tractor-trailer in Coolbaugh Township, the police affidavit said. The tour bus then struck Wyatt’s vehicle, according to the affidavit filed Wednesday. The court papers make no reference to Wyatt’s medical condition that day.

In an interview six months after the crash, he told The Associated Press that he didn’t remember it. It occurred 10 to 15 minutes after he stopped at a weigh station.

“I remember leaving, getting back on the highway, going down the highway and that was it,” said Wyatt, who said he had no interest in driving again.

“It’s a lot to deal with,” he told the AP. “When you see people on the side of the road covered up with blankets, you know that ain’t good. You wake up in the middle of the night and that’s what you see.”

Wyatt, who had a medical certificate allowing him to drive commercially, said he had a stent put in after the crash when his doctor found a severely blocked artery.

The collision killed honeymooner Marco Fornasetti, of Vicenza, and injured his wife. The others killed were tourist Rino Guerra, 69, of Desenzano Del Garda, Italy, and bus driver Alfredo Telemaco, 54, of New York City. At least eight people were injured.

Some of the lawsuits filed over the crash have been resolved. Tour guide Ivan Galietti, who was sitting behind the driver and was badly injured, was awarded $5.2 million through mediation, according to his lawyer, Jamie Anzalone.

According to Anzalone, records showed no glaring problems with Wyatt’s medical condition or work hours. Wyatt reported taking his diabetes medicine but not his blood pressure medicine that morning, but none of the medical testing after the crash showed anything alarming, the lawyer said.

Wyatt, who was arraigned Wednesday, remains jailed in Monroe County unable to post $150,000 cash bail. He does not have a home number listed and has asked for a public defender. His preliminary hearing is July 19.

The prosecutor handling the case for the Monroe County district attorney’s office was out of the office and did not immediately return a message Thursday.